Innovation and resilience was the theme of our regular monthly Networking for Success session held on January 30th.

It’s no secret that these traits are important for corporate success, but for Evelyne Nyairo, an immigrant from Kenya and an entrepreneur in Calgary, she personified them in abundance.

As an environmental scientist and founder of Ellie Bianca, an all-natural, environmentally sustainable and socially conscious skin care, her company recognizes beauty in all forms; and supports the empowerment of women through business and education. Evelyne is also the CEO of AB EnviroSolutions.

Evelyne addressed a group of 62 young entrepreneurs and business professionals with an engaging presentation on innovating yourself and how to navigate obstacles with resiliency. Much like her penchant for eschewing traditional protocols dictated by parents in a country like Kenya; including defining careers for woman such as teaching and nursing, the decision to choose her own path of life and become a scientist or a diplomat punched back at the long-held idea that the parents chose for their children whatever they wanted them to be, rather than it being something you could chose for yourself.

“I was always a rebel and wanted to do things differently. I wanted to be a scientist or a diplomat, where I could use the power of words,” she said while emphasizing the power of dreaming big.

Landing in Edmonton with only eighteen dollars in her pocket, Evelyne faced initial social, cultural, financial and even climatic hiccups, but she took all those challenges as opportunities and transformed them to her advantage.

“I was the only black girl in my class, and at times it was hard for me to find a partner. My father advised me to create value and in return, people will give you value, and be your friends,” she said. Evelyne stressed the need to be very careful in choosing friends. Quoting his father again, she said he always asked me to never underestimate the power of influence. “Your friends will define your life. So be careful what kind of people you hang out with.”

A majority of the audience were immigrants themselves, and she encouraged them to always challenge the status quo and ask questions. She urged them to refrain from spending years setting up obstacles for themselves, and to ask for help wherever they can. By building connections and finding cheerleaders, Evelyne suggested that when you embrace all that a country like Canada has to offer, you have no idea how you might actually shake the pillars of existence.“ In this tough milieu, your connections and cheerleaders play a pivotal role.”

Another factor which plays a very significant role in an immigrant’s life, is hard work. To not just embrace challenges, but to take them as opportunities to grow. With sheer hard work you will make your dreams come true. “Disconnect with your past successes, embrace the new reality, navigate the business environment, innovate yourself and apply the best possible success strategy.”

And while immigrant entrepreneurs may face hardships in their odyssey, they should never look at profits only, they should also look at the losses as well, according to Evelyne. “It’s not easy to be a newcomer, but we should always be focused on our losses and analyze them. “Join me in turning that loss into a profit,” she concluded. 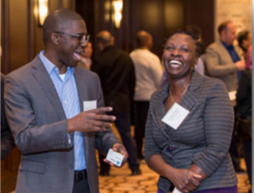 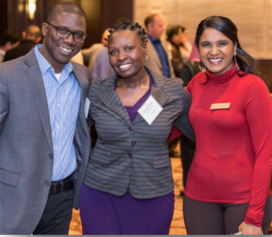 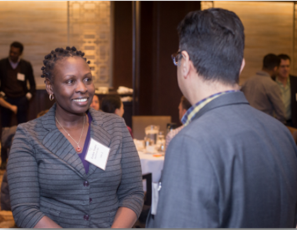 The second presentation of the morning was conducted by Samuel Obadero, an IT professional and founder of Motif Photography, who arrived in Calgary from Nigeria only six months ago. He agreed with what Evelyne had shared and he said her words resonated strongly with him. Born with his left fist in his mouth, Samuel found he was speech deficient, so he looked for other ways to express himself. Photography became the medium for his expression.

He shared his photography experience with the audience and focused on a place called Makoko in Lagos, Nigeria, a small but crowded community that sits on a fetid lagoon, colored in sepia and greyscale colour. Wooden stilts are tucked deep inside the brackish waters with bits and pieces of rubbish adorning its surface and a tangle of boats impatiently snaking through the labyrinth of its waterways. Above the waterways, in fitting contrast, is the most travelled bridge on the West African continent. For everyone who travels the bridge; the skies of the slum dwellers are blue and bright, but their waters are not.

Makoko is a 19th century slum, formerly a fishing village and one of the oldest slums in Nigeria; listed as one of the top 10 slums in Africa. It is regarded as the world’s biggest floating city, an area with an estimated population of approximately 86, 000 people. With low hygiene, extremely poor sanitary conditions, and the constant exposure to extreme weather conditions, this population is susceptible to its rancid effects on human health.

Despite all this, Samuel said, these people didn’t want to leave their “comfort zone” and were happy with their slum lives. “One thing I learned was that I would have to get rid of my comfort zone; try not do anything I had already done, and to try new things in Calgary.”

As a result, Samuel tried everything, and says that the best thing he did was to contact CCIS. Not only was he welcomed, but he was given ample opportunity to excel in his areas of interest. “I love CCIS and its networking team of Tatjana, Khatereh, Paloma, Adriana and Steve. They are amazing!” When talking about the mentorship programs for newcomers, Samuel advised that the mentees must follow the instructions of the mentors in letter and spirit, and in doing so, they will be better equipped to adjust to the work environment in Canada, with greater success and with less barriers.

Following the formal talk, all the participants had the opportunity to speak with both presenters and to network with other professionals and newcomers to share their own personal experiences, while making new business contacts.

For information on our next Networking For Success event, please contact Khatereh at